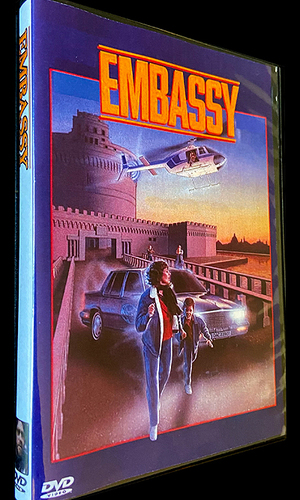 Nick Mancuso stars in the made-for-TV Embassy. Cast as an American ambassador stationed in Rome, Mancuso's life is thrown into turmoil by a crucial computer chip. When not trying to keep U.S. defense secrets from falling into the wrong hands, he must juggle the affections of his press-attache-girlfriend, (Mimi Rogers), and his girlfriend's chief rival (Blanche Baker). Embassy was intended as the 2-hour pilot for a weekly series; it didn't sell, but Nick Mancuso's next venture in the TV-pilot field, Stingray, proved successful. Embassy was initially telecast on April 21, 1985.