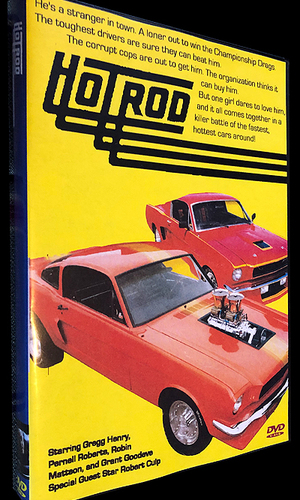 Hot Rod (a.k.a. Rebel of the Road) was a 1979 made-for-TV movie starring Gregg Henry, Grant Goodeve and Robert Culp. A drag racer (Gregg Henry) enters a local championship race with a 1965 Plymouth. However, he runs up against the town boss, a corrupt sheriff (Robert Culp) who has already made arrangements to ensure that his own son (Grant Goodeve) wins the race. The movie has now become a cult classic especially for classic car and racing fans. The film also stars Pernell Roberts and Ed Begley Jr.