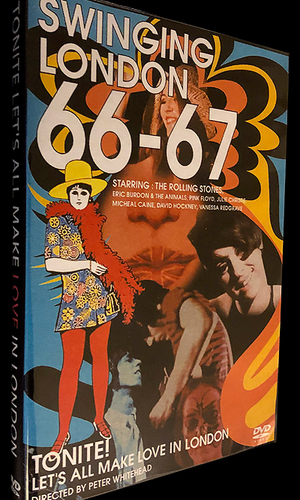 AKA "London Is a Swinging City"

New transfer! (4/23/2021) This 1967 documentary of the London scene in the swinging-60's is a visual treat for Mod enthusiasts everywhere. Featuring a who's-who of the scene, Tonight Let's All Make Love In London is a visual patchwork of 60's culture, seen through the eyes of the people leading it. Mick Jagger, Michael Caine, Vanessa Redgrave, Allen Ginsberg, and Julie Christie are all here, alongside counter-culture artists and other musicians who helped shape their generation and future ones to come. Most of the musical content comes in the form of extremely rare concert footage and inside studio recording sessions, while other segments include candid interviews, strange political demonstration footage, and even a segment on the radical art of body painting! Yes, politics and sex are on the palette here as well as a psychedelic soundtrack from a very young Pink Floyd.