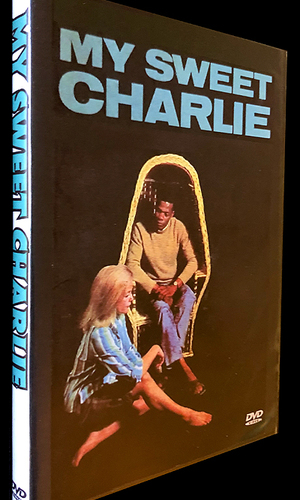 Having tried and failed to produce the David Westheimer novel and play My Sweet Charlie as a theatrical film, Richard Levinson and William Link had to be content with making the property as a TV movie-which turned out to be one of the very best of its kind. Al Freeman, Jr. plays Charlie, a black New York lawyer falsely accused of a crime in a rural Texas town. Escaping from his tormentors, Charlie takes refuge in a boarded-up farmhouse. Here he meets another fugitive: unmarried, pregnant Marlene Chambers (Patty Duke). Hostile towards each other at first, Charlie and Marlene become friends. The story's tragic ending nonetheless holds a glimmer of hope. Emmy Awards went to star Patty Duke (the first ever given to a TV-movie actress) and to the script by Levinson and Link. First telecast January 20, 1970, My Sweet Charlie was later given a brief theatrical release.