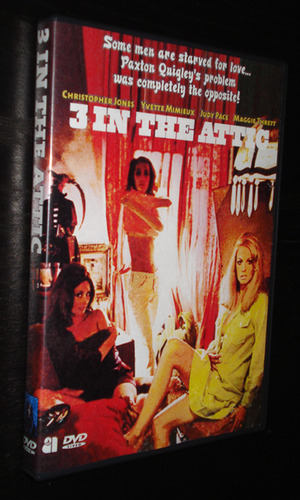 (New transfer, 1/20/21) A modern Don Juan pays the price when he "two-times" three different women. Paxton Quigley (Christopher Jones) is the campus Casanova who sleeps with Caucasian coed Tobey (Yvette Mimieux), the black beauty Eulice (Judy Pace) and the Jewish hippie girl Jane (Maggie Thrett). The three women discover the extra curricular activities of the man, and they seek revenge by locking Paxton in a attic where they feed him steak and try to kill him with sex. Soon Paxton goes on a hunger strike as the viewer is left to wonder whether or not a man's ultimate sexual fantasy can lead to his downfall -- or even death. What a way to go. Chad and Jeremy provide the music, which includes the title track in this feature plagued by lines like "Is it possible for a woman to be Jewish and psychedelic at the same time?"