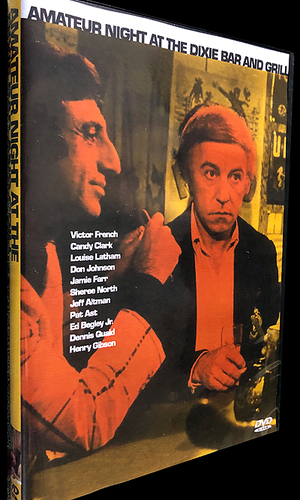 Director Joel Schumacher makes like Robert Altman in the made-for-TV Amateur Night at the Dixie Bar and Grill. In the tradition of Altman's Nashville, Schumacher's film is a rambling, anecdotal study of an amateur talent show in a tawdry Southern saloon. The link between the two films is strengthened by the presence in Amateur Night of Henry Gibson, who'd played a Porter Wagoner type in Nashville. Among the contestants is country-western singer Tanya Tucker, who also contributed some of the background themes for the film's musical score. Amateur Night at the Dixie Bar and Grill was produced by Motown Industries' motion picture division. Sidebar: To improve ratings, the ad copy for this film was headlined "Disco Killer on the Loose!"--then, in smaller type, the copy explained that "killing" was merely a slang term for winning over the audience!