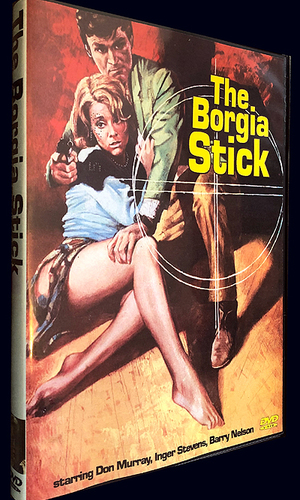 The Borgia Stick opens with a funeral: the "guests of honor" are also the film's stars, Don Murray and Inger Stevens. In flashback, we learn that Murray and Stevens were for all intents and purposes a happily married suburban couple. Before long, we discover that the couple wasn't married at all, nor were they particularly happy. In fact, Murray and Stevens were employees of an all-powerful crime syndicate, plunked down in suburbia to lay the groundwork for a mob takeover. When the couple decides to go straight, they sign their own death warrant....maybe. A tremendous improvement over the handful of made-for-television films that preceded it, The Borgia Stick was the first TV movie to enjoy favorable notices from the critics. Its first telecast on February 25, 1967, was one of the highest-rated events of the 1966-67 season.