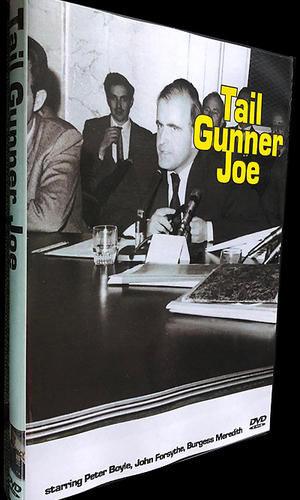 Told in flashback form, Tail Gunner Joe traces the rise and fall of Wisconsin senator Joseph McCarthy (Peter Boyle). The story begins with McCarthy's judicial career, then progresses to his rise to the U.S. senate on the Republican ticket and his ultimate exploitation of the postwar "anti- communist" movement. Declaring in a 1950 speech that he personally knows of several communists in high government offices, McCarthy becomes a major political power, influencing the outcome of elections, stoking the flames of the "Red Scare" of the 1950s and ruining the reputations of several people suspected of being "commie-symps". The Senator meets his Waterloo when he takes on the US Army, accusing the military of harboring known subversives. During a televised hearing, he recklessly casts aspersions upon a young lawyer, prompting defense attorney Joseph Welch (Burgess Meredith) to mutter disconsolately "Have you no sense of decency, sir?" Television reveals McCarthy for the demagogue that he is, and soon he plunges into obscurity and acute alcoholism. He dies discredited in 1957 while still only in his forties. Tail Gunner Joe is in its own way as biased and unfair as any of Joe McCarthy's diatribes but this made-for-TV movie works as a brisk, entertaining recollection of an era in which "guilt by association" was a byword. As Joe McCarthy, Peter Boyle's performance is so convincing that it borders on the supernatural.