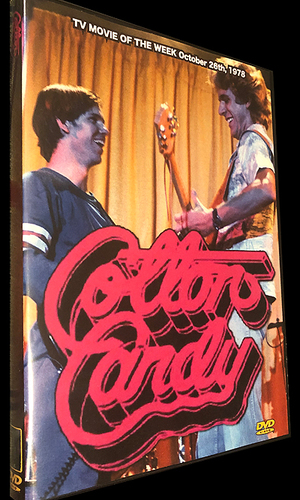 Cotton Candy is a 1978 American made-for-television drama film directed by Ron Howard and filmed in Dallas, Texas. George Smalley (Charles Martin Smith) is a high school senior trying to find direction in life. His attempt to land a spot on the varsity football team fails when he is cut from the team. A songwriter in his spare time, he and his pal, Corky Macpherson (Clint Howard), recruit other local teens to form a rock band to ultimately perform in the town's Battle of the Bands competition. Together, they recruit a set of brothers who play keyboards and guitar, a former gang member on bass guitar, and most unexpectedly, an extremely talented female drummer. Popular singer and big man on campus Torbin Bequette (Mark Wheeler) leads the local rival band, "Rapid Fire" (whose entire repertoire seems to consist of a hard rock version of "I Shot The Sheriff") attempts to undermine them.