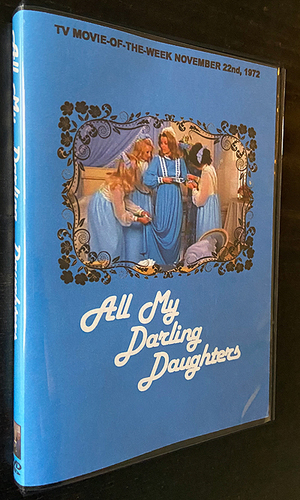 Robert Young stars as Judge Charles Raleigh in the made-for-television All My Darling Daughters. The Judge happens to have four daughters, played by Darleen Carr, Judy Strangis, Sharon Gless, and Fawne Harriman (what did all the detective shows and sitcoms do for ingenues while these four ladies were tied up in this film?) And, as the fates would have it, all four daughters plan to get married on the same day! Screenwriter John Gay and David Lowell Rich, two of the most prolific TV-movie artisans in Hollywood, managed to maintain audience interest despite the story's inbuilt cliches. Originally telecast November 22, 1972, All My Darling Daughters was followed by a TV-pilot sequel, All My Darling Daughters' Anniversary.