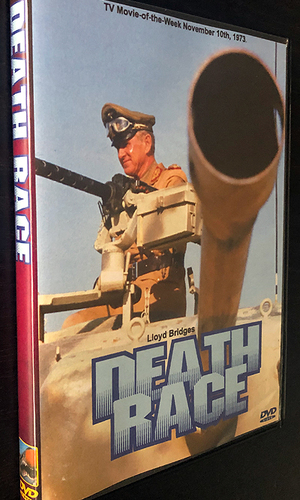 AKA "State Of Division"

Lloyd Bridges' gloriously unconvincing German accent is but one of the guilty pleasures of Death Race. Set during the African campaign of World War II, this made-for-TV nailbiter pits Nazi general Bridges against wounded American pilot Roy Thinnes. Manning the controls of a tank, Herr Bridges intends to blast Thinnes into eternity-but it ain't gonna be that easy. Billed third as "Stoeffer" is Eric Braden, who under his given name of Hans Gudegast was one of the stars of a previous desert-war TV series, The Rat Patrol (1966-68). Death Race first plotted its course on November 10, 1973.