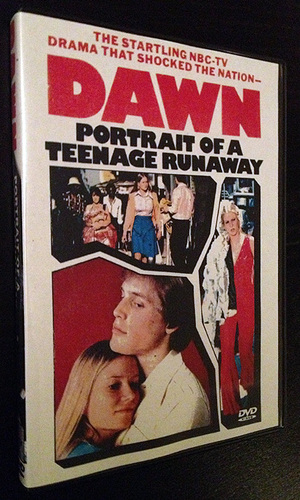 In Randal Kleiser's telemovie Dawn: Portrait of a Teenage Runaway, Eve Plumb (The Brady Bunch) stars as Dawn, who leaves home at 15 for the glamour of L.A. Friendless, she is taken in by the smooth line of Swan (Bo Hopkins), who offers to be her protector. Before long, Dawn has become a streetwalker, with Swan taking a sizeable chunk of her earnings. She finds true friendship in the form of another runaway, male hustler Alex (Leigh McCloskey) -- whose own story would be delineated in a 1977 sequel, Alexander: The Other Side of Dawn. Having learned a lesson with its controversial airing of Born Innocent, NBC preceded the September 27, 1976, premiere of Dawn: Portrait of a Teenage Runaway with a "parental discretion" disclaimer.