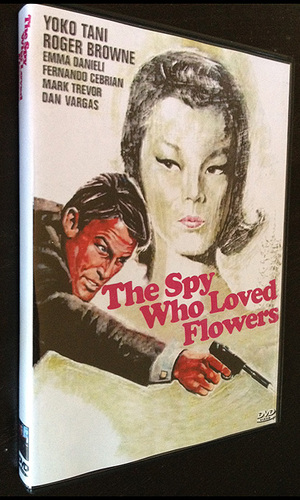 AKA "Le spie amano i fiori"

Ahmed wears a carnation on his suit whenever he’s out and about trying to kill those who would defend and fight for freedom! He goes undercover with his sinister Chinese partner (Mei Lang) at a flower shop that magically transforms into an antique store whenever the police come to investigate! Most diabolical of all though is that he even works on crossbreeding different flowers all the while he’s got the good guys locked up in his secret lair, his hideous evil culminating when he announces the creation of a brand new flower that he calls "Oriental Sunset." Get ready for another Superseven adventure following his trip to the Pyramids in Super Seven Calling Cairo. This time secret agent Martin Stephens (Roger Browne) tracks the floral fiend all the way to Athens where director Umberto Lenzi gets another chance to use a historical location (this time it’s the Acropolis).