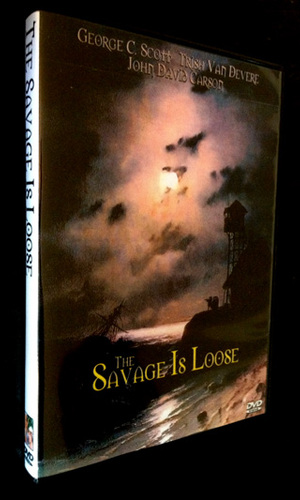 George C. Scott produced, directed and distributed this offbeat drama. Near the turn of the century, John (Scott), his wife Maidi (Trish VanDevere) and their young son David (Lee Montgomery) are shipwrecked on a remote island. Resigned to the fact they may never be rescued, John teaches David how to survive on his own, and instills in him a macho philosophy that the strong will always defeat the weak. As the years pass, David (now played by John David Carson) grows to adulthood, and he begins formulating his own interpretation of his father's teachings -- as the stronger man, he is now ruler of the island, and that the island's only woman should rightfully be his. The Savage Is Loose was the second and last theatrical feature George C. Scott would direct, though he would later helm a made-for-TV movie about the life of baseball great Satchel Paige.