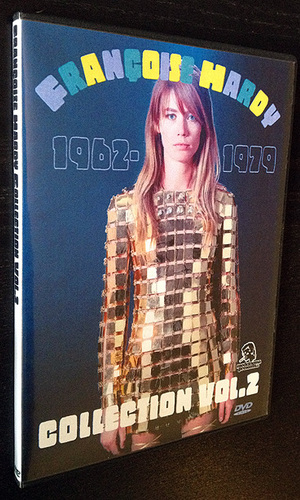 One of the most popular French TV clips of all time is the B&W footage of a young and extremely nervous-looking Françoise Hardy being given a firm dressing-down by famous music teacher Mireille. This image of Hardy sitting uncomfortably in front of the microphone, timidly whispering "Oui, madame", gets to the root of the singer's eternal appeal. For this striking contrast with the world of showbiz was exactly what the French public loved most about Hardy. With her shy temperament, her soft voice and her quiet natural beauty, Françoise Hardy was the ultimate girl-next-door made good who became a star in her own right, her records rocketing to the top of the French charts at home and abroad. This second DVD series compiles more rare footage of Françoise performing on French television. Over 50 songs including "L'amitié", "La fille avec toi", "Tous les garçons et les filles", "Le plus difficile", "Flashbacks", "Les garçons", "Comment Te Dire Adieu", "À Tout Bois", as well as duets with Jacques Dutronc and Patrick Bouchitey.