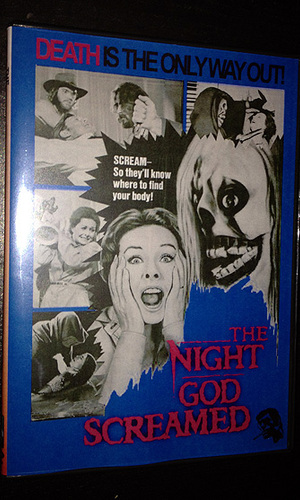 The Night God Screamed is genuinely creepy obscure gem of horror without there being much of a budget for make-up effects.  Quite a number of 70's horror movies revolved on satanic cults and devil worshiping, but this film centers, or at least partially centers, on the members of a fanatic Catholic movement and I assure you these Jesus freaks are equally uncanny as Satanists; if not uncannier. Billy Joe, a self-acclaimed prophet oddly resembling Jesus Christ himself, and his herd of brainwashed disciples crucify a preacher before the eyes of his poor and defenseless wife Fanny. The woman testifies in court and the culprits are sentenced to death, but naturally not before Billy Joe swears he'll avenge himself. A certain time later, Fanny becomes stalked and terrorized by religious maniacs, not coincidentally whilst she's babysitting the (adolescent) kids of the judge that sentenced the verdict. In case of movies like The Night God Screamed, the lack of budget is actually the biggest trump. Director Lee Madden obviously searched for different ways to create suspense and an atmosphere of disturbance, other than the usual visual shocks effects and grisly murders, and he definitely succeeded!