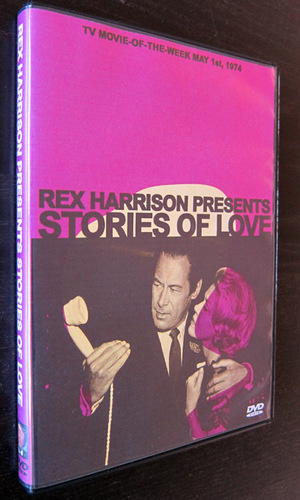 This unsold pilot has borne a plethora of titles: Short Story, Short Stories of Love and Three Faces of Love. The "Rex Harrison" tag was added when Harrison agreed for a hefty fee to introduce the three playlets contained within the pilot's 90 minutes, each based on the works of a famous author. "Epicac" is a Kurt Vonnegut Jr. piece about an electronic brain which falls in love with its programmer (Julie Sommars). "Kiss Me Again" is the much-imitated Daphne DuMaurier story about a World War II veteran (Leonard Nimoy) who is attracted to an otherworldly murderess (Juliet Mills). And Somerset Maugham's "The Fortunate Painter" stars Lorne Greene as a foxy papa who tries to smooth the course of romance between his daughter (Jess Walton) and an impoverished artist. It is obvious that NBC had no intention whatsoever to expand this pilot into a series: for its network showing on May 1, 1974, it was unceremoniously dumped opposite CBS' ratings leader Cannon.