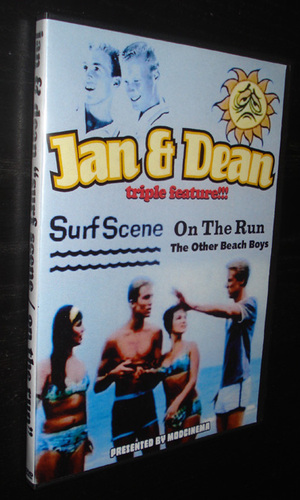 Modcinema presents, 3 "Jan & Dean" features on one DVD!! SURF SCENE (1963 USA TV Pilot, 23 mins.) Unaired pilot featuring lots of surfing along with Jan & Deans style of comedy. Pilot was scrapped after news broke of Dean's involvement in the Frank Sinatra Jr. kidnapping case. ON THE RUN (1966 USA TV Pilot, 28 mins.) 48 hours in the life of college student teen superstars Jan & Dean! They fly from LA to San Diego to a sold-out show. They visit the zoo, do some skateboarding, then it's off to Washington, DC for another concert. In the end, it's back to school for exams. DOCUMENTARY (2002 USA TV, 43 mins.) An in-depth look at the rise and tragic fall of Jan and Dean. Jan's near-fatal car wreck threw him in a 33-day coma - when he awoke he was paralyzed and had no memory. Dick Clark played American Bandstand kinescopes to help him remember.