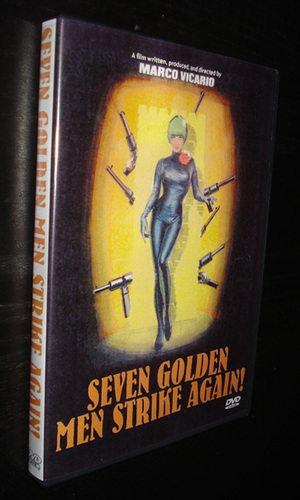 Director Marco Vicario's sequel to his own Seven Golden Men, this similarly lighthearted crime film begins with The Professor (Philippe Leroy) and his men captured by American agents during a plot to steal a vault from a moving train. They are assigned to kidnap Castro-like Latin dictator Enrico Maria Salerno in order to avoid prosecution, and The Professor uses the mission as a convenient excuse to jack $7 million in gold from a nearby ship. Rosanna Podesta returns as the sexy Giorgia, and Vicario fills the film with campy setpieces including flying jet-packs and a bizarre ending. Armando Travajoli's score is typical of its time, featuring a breathy female voice humming "oo-wah" to elevator music.