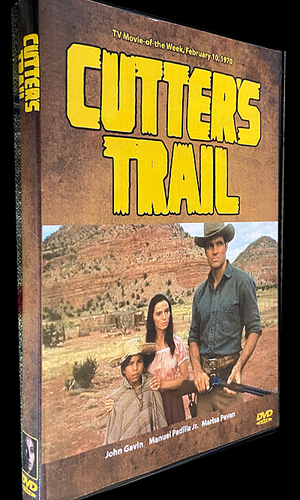 John Gavin stars as Santa Fe marshal Ben Cutter, whose homecoming is blighted when he finds his town has been taken over by a Mexican bandit gang. Accompanied by two of the less frightened townsfolk--a small boy (Manuel Padila Jr.) and the boy's mother (Marisa Pavan)--Cutter sets out to rid the town of the interlopers. This TV movie was the pilot for a weekly series, slated for a CBS time slot. Half a dozen scripts were prepared before the network decided to turn thumbs down. Cutter's Trail was originally telecast in a 90 minute slot, then expanded to two hours for syndication.