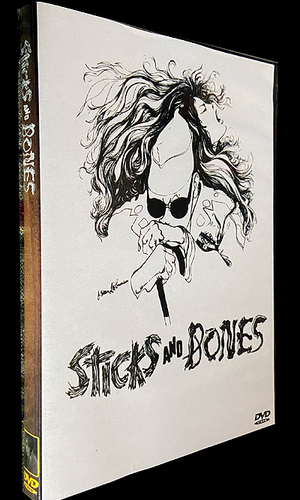 Sticks and Bones is a television film adapted from the Tony Award-winning play of the same title by David Rabe. The black comedy focuses on David, a blind Vietnam War veteran who finds himself unable to come to terms with his actions on the battlefield and alienated from his family because they neither can accept his disability nor understand his wartime experience. Rabe explores the conflicted feelings of many civilians during the era by parodying the ideal American family as it was portrayed on the television sitcom The Adventures of Ozzie and Harriet. Beneath the perfect facade of the playwright's fictional Nelson family are layers of prejudice, bigotry, and self-hatred that are peeled away slowly as they interact with their physically and emotionally damaged son and brother. In 1973, Robert Downey Sr. wrote the teleplay for and directed a CBS television film based on Rabe's play. The cast included DeYoung as David, Aldredge as Ozzie, and Anne Jackson as Harriet. The subject matter was so controversial that 94 of the network's affiliates refused to broadcast the film. Please note: a non-removable time code appears on the bottom of the screen throughout movie.