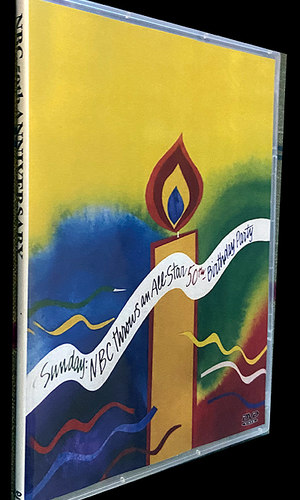 NBC: The First 50 Years, aired in November of 1976 as a four-and-one-half-hour extravaganza commemorating NBC's 50 years of radio and television broadcasting. An unprecedented television special airing as part of NBC's "Big Event" series, the program garnered the highest ratings of any program to that date. It's record of high ratings was beaten by the final episode of "Roots" the following year. The program is hosted throughout by Orson Welles, and different segments are hosted by a variety of past and (then) current NBC artists. Although the program features mostly NBC television programs, there is much on old-time radio. Recordings of old programs are heard while on-screen shots of old radios, and radio artists are shown. Also a novel feature is animation that was created by Bill Melendez. Some of this animation is shown during the segments featuring old-time radio. Some personalities appearing on this program were Johnny Carson, Dean Martin, Jerry Lewis, Gregory Peck, George C. Scott, Angie Dickinson, Dinah Shore, Bob Hope, and Kukla and Ollie.