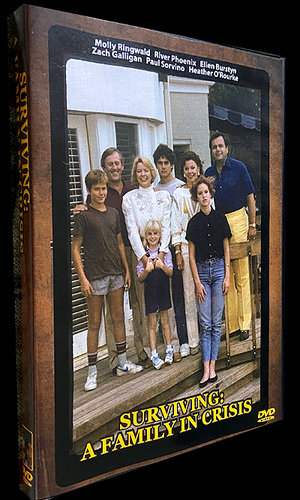 Originally telecast in a three-hour network slot, Surviving is virtually two films in one. In the first 90 minutes, we see the identity crises and outside pressures that propel a "normal" teenaged boy (Zach Galligan) and a "disturbed" teenaged girl (Molly Ringwald) into committing suicide together. The second portion of Surviving explores the emotional residue left behind by the youngsters' deadly pact. Specifically spotlighted are Zach's parents (Len Cariou and Ellen Burstyn), who feel that Molly goaded their boy into killing himself; and Molly's parents (Paul Sorvino, Marsha Mason) who are consumed with guilt over not catching on to the warning signs of their daughter's despair. Though the acting is overly ripe at times, Surviving never loses dramatic focus.