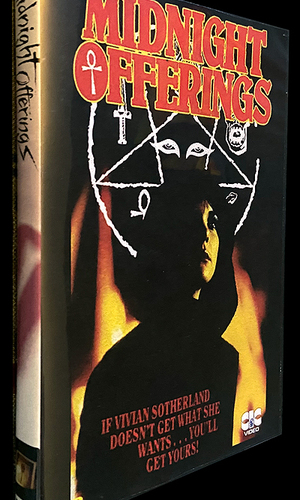 In a shocking bit of counter-casting, Melissa Sue Anderson stars in this TV-movie shocker as Vivian Sotherland, a beautiful -- and wholly evil -- teenaged witch. Accustomed to eliminating anyone who gets in her way, Vivian has lovingly made certain that her sweetheart David Sterling (Patrick Cassidy) will not flunk out of high school through the simple expedient of killing all his teachers. Alas, the clueless David throws Vivian over in favor of a new girl in school, Robin Prentiss (Mary Beth McDonough). Fully prepared to add Robin to her ever-growing list of victims, Vivian is rather put out to discover that her romantic rival possesses a few supernatural powers of her own. Midnight Offerings was first broadcast February 27, 1981, on ABC.