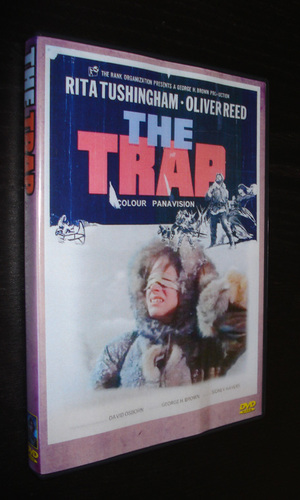 Every ten years or so, the all-purpose title The Trap is applied to a film about psychological rather than physical entrapment. This 1966 British/Canadian coproduction stars Oliver Reed as a roughhewn fur trapper of the 1890s. He has missed the annual "wife auction" due to inclement weather, and must settle for what's left: a timorous mute girl, played by Rita Tushingham. Though she lives in mortal terror of her husband, Tushingham nurses Reed through a near-fatal illness. The awe-inspiring location photography of The Trap frequently upstages the strenuous dramatics of its stars.