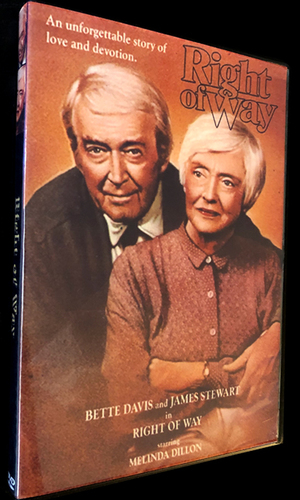 This story about an elderly couple who start a large controversy when everyone learns they plan on committing suicide stars James Stewart as the retired Teddy Dwyer, and Betty Davis is his wife Mini Dwyer. When Mini learns she is terminally ill with a blood disease, the couple decide to end their lives peacefully, at the same time. Mini's mistake was to finally tell her daughter Ruda (Melinda Dillon), and from there, the news eventually leaks out and gets passed on to the media. Right of Way tries to balance precariously between a serious theme and a light-hearted couple, as Teddy continues engrossed in his books and Mini in her long-practiced art of making specialty dolls, with their housecats all around them.