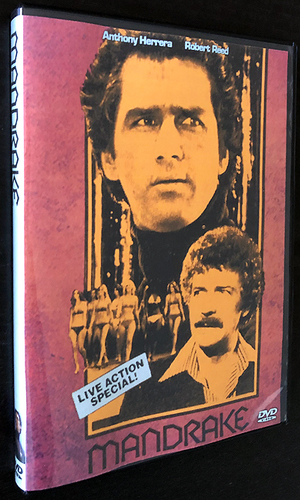 This feature-length pilot for an unsold TV series was based on Mandrake the Magician, the long-running comic strip created by Lee Falk and Phil Davis in 1934. Raised in the Himalayas, the orphaned Mandrake (played as a child by David Hollander, and as an adult by Anthony Herrera) is taught the secrets of magic and mass hypnosis by the wizard Theron (James Hong), and is given an enchanted amulet that will protect him from harm. With the help of his loyal assistant Lother (Ji-Tu Cumbuka), the caped, top-hatted Mandrake attempts to thwart an insane extortionist who threatens to kill innocent amusement-park patrons unless he is given 10,000,000 dollars. Princess Narda, Mandrake's exotic vis-à-vis from the funny papers, is here replaced by a feisty female cohort named Stacy (Simone Griffeth). Earning no plaudits from devotees of the original comic strip, Mandrake was little heard from after its initial NBC telecast on January 24, 1979.