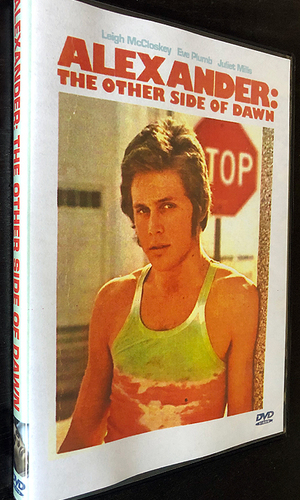 First telecast May 16, 1977, Alexander: The Other Side of Dawn is the gender-switch follow-up to the 1976 TV movie Dawn: Portrait of a Teenage Runaway. While Dawn concentrated on the sordid descent of a young girl into crime and prostitution, Alexander devotes its time to the exploits of a teenaged boy (Leigh J. McCloskey), whose character was introduced in the earlier film. A former Oklahoma farm boy, Alexander takes to the streets of LA, where he becomes a hustler and gigolo. After falling in love with Dawn (Eve Plumb), Alexander strives to escape his dead-end world and begin life anew. Director John Erman uses moody overtones to capture the darkness and despair of Alexander's life. Erman, an accomplished director of television movies, also directed the highly-acclaimed, touching AIDS drama, An Early Frost.