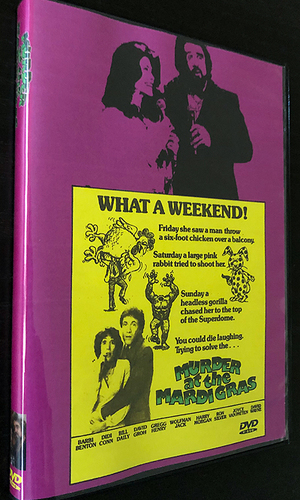 Didi Conn, who skyrocketed to fame thanks to Saturday Night Fever (77) and You Light Up My Life (78), did nothing for her career with the made-for-TV Murder at the Mardi Gras. Conn plays a loopy young Philadelphia waitress who witnesses a murder during the New Orleans Mardi Gras celebration, but can't get anyone to believe her. The murderer, who is disguised variously as a large pink rabbit and a headless gorilla, spends most of "Fat Tuesday" pursuing poor Didi Conn up street, down alley, and around the other costumed revellers. With an all-TV cast, it's hard to tell at first whodunit--since all the actors have played the mystery killer at one time or another in their careers. The biggest mystery is the participation of director Ken Annakin, who surely does not list Murder at the Mardi Gras on the same resume as his earlier Swiss Family Robinson, The Longest Day, and Those Magnificent Men in Their Flying Machines.