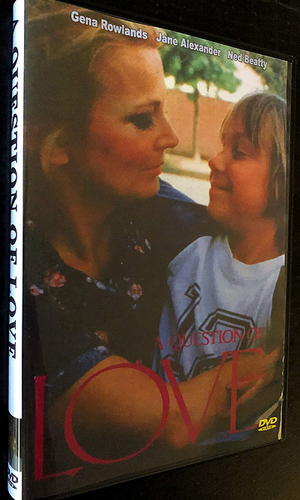 A Question of Love is the deceptively bland title for this controversial made-for-TV film. Gena Rowlands plays a divorced nurse who is doing her best to raise her young sons (Keith Mitchell and Josh Albee) without their dad's help. Rowlands' ex-husband Clu Gulager files for full custody of the children. It isn't that Gulager is selfish or vindictive: the fact is that Rowlands is a lesbian, with a live-in lover (Jane Alexander), and Gulager feels that her lifestyle is not in the boys' best interests. Nothing is cut and dried in William Blinn's intelligent screenplay: there are no heroes and villains, no absolute "right" or "wrong." Extremists and moderates are depicted with equanimity, as are the points in favor of both Rowlands' and Gulager's position. While it has unavoidably dated since its first telecast on November 26, 1978, A Question of Love retains most of his dramatic power even after nearly four decades.