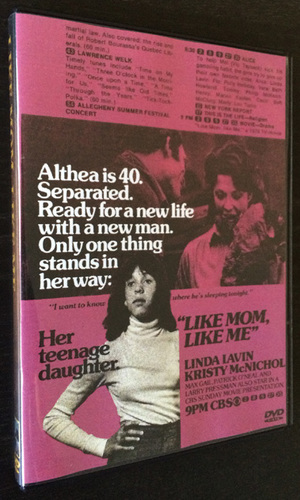 Professor Patrick O'Neal packs his pipe and cardigan and walks out on wife Linda Lavin and daughter Kristy McNichol. Left with nothing but each other, Lavin and McNichol find themselves agreeing to disagree often as not. The principal bone of contention is the fact that Mom is dating again. McNichol disapproves of this, just as virulently as Lavin disapproves of her daughter imitating her own behavior. And that's how novelist Sheila Schwartz came up with the title Like Mom, Like Me, which was produced as a TV movie by onetime film star Nancy Malone.